Deliverable 4.1 tackles an important aspect of the technology development in the project which is ensuring an up-to-date understanding of the various cybersecurity concerns and existing solutions and identifying gaps and improvements. Cybersecurity is a challenging research and development area that needs to continuously evolve to keep pace with emerging threats and vulnerabilities. The activities leading to the deliverable have contributed considerably to identifying the appropriate technologies and standards and ruling out the less useful ones.

Some standards have been evaluated in D5.2 (e.g. ZigBee [‎2], FIPA-ACL [‎2‎3], OpenADR [‎4]) for their relevance and suitability to Mas2tering. D4.1 revisits those standards to evaluate their security and their need for adding security standards and technologies to protect their implementation. Some standards (e.g. FIPA-ACL) have no built-in security while others do have limited security features (e.g. ZigBee). OpenADR has strong built-in security but lacks some considerations of consumer privacy.

D4.1 details the evaluation of security standards that are potentially useful for protecting the Mas2tering platform. Several security standards (e.g. ISO/IEC 2700 series [‎5], IPSec, NIST 7628 [‎6]) are evaluated based on multiple important aspects including their applicability and relevance to Mas2tering use cases. These evaluations include descriptions of recommendations regarding their use in the project. EBIOS [‎7] risk assessment method used for Mas2tering use cases (see ‎Annex A) is compatible with IEEE 27001.  Other security standards are or will be used in the project include TLS (Transport Layer Security), IPSec, XACML as well as standard algorithms such as AES (Advanced Encryption Standard).

In order to ensure a secure implementation of the Mas2tering platform, this document also includes security analysis of the software technologies that will be used in the project. These include JADE [‎8] (Java Agent Development) framework, JEMMA [‎9] (Java Energy Management Application) framework and FIWARE [‎10] Generic Enablers. Their security features and weaknesses are outlined. Due to the security limitations of JADE, a security add-on called JADE-S is available which provides several features such as message authentication and encryption. JEMMA also has security shortcomings such as the lack of authentication and access control. Regarding Generic Enablers, it has been found that they often lack rigorous security testing and may not be reliable especially as security components. Therefore, the project identified alternative more reliable software components.

The deliverable includes guidelines and recommendations on security technologies and standards, and on security testing and verification of Mas2tering platform components. The recommendations aim to address security requirements and overcome the security weaknesses in the used standards and technologies. These recommendations include which standards should be used and what security configurations are needed such as those in relation to certificates and key sizes. The recommended security testing and verification activities are based on the use cases identifying specific security objectives and taking into consideration the identified security vulnerabilities from the risk assessment.

This chapter describes security capabilities of existing technologies that are particularly relevant to Mas2tering. It also analyses related EU projects including the adequacy of their implemented solutions for use in Mas2tering.

This section presents the analysis of the security and privacy of a number of technologies that have been selected to be used in the Mas2tering platform. These technologies include JADE platform and its extensions, relevant HAN technologies including JEMMA and FIWARE Generic Enablers.

JADE (Java Agent Development) is a popular MAS platform. It has been selected in order to provide the basis, on top of which the Multi-agent system for Mas2tering solution will be built. As such, it will play a central role in Mas2tering, and this is why we study it from a security point on view in this section. We first review the architecture of JADE and then describe how Security is tackled in JADE.

JADE is a distributed agent platform, which is composed of several Jade Agent Containers, running on different physical hosts. Each agent container may contain any number of agents, whereas there is only one main container, which contains special agents providing services that are unique to the platform: the AMS (Agent Management System) and the DF (Directory Facilitator).  Figure 1 shows an example of a JADE platform that is distributed over several physical hosts. 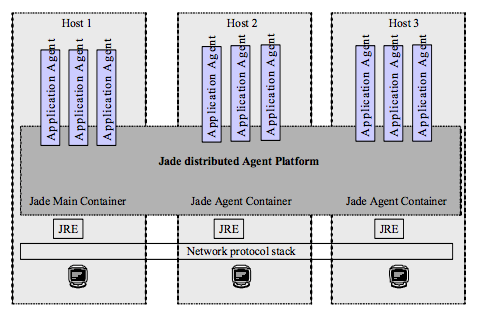 Agents are Java threads with communication capabilities, provided by the platform allowing them to communicate with any other agent transparently of the physical location. Services in JADE are either provided as kernel services, which can be easily extended by add-ons, or can be provided by dedicated agents, as it is the case with AMS and DF.

The communication mechanism between agents is implemented differently depending on their respective physical location. If the agents are hosted in the same container, Java events are used; if the agents are located on the same hosts but in different container, RMI is used; if the agents are located on different platform instances, MTS (Message Transfer Service) is utilised. Messages are handled either by an IMTP (Internal Message Transfer Protocol) or by MTP (Message Transport Protocol) in the case messages are transmitted between distant hosts. MTP encodes the FIPA-ACL messages with which the agents communicate over transport layers. Jade already counts on implemented transfer protocols, namely: CORBA IIOP and HTTP, which are used by default. It is possible to use further protocols by adding plugins and configuring JADE to use them.

Distributed systems require greater attention to security issues, especially on multi agent systems that are composed of autonomous agents. The basic version of JADE has a number of security shortcomings, namely:

While this platform is a core part of the Mas2tering implementation, further effort is required for providing high security to the system.

Due to the previous limitations of the basic JADE platform, an add-on was developed to tackle all the above mentioned issues. This add-on is called JADE-S, and it focuses on protecting JADE-based multi agent systems against security attacks. In the following, we describe JADE-S analysing its features and its limitations.

JADE-S, which is the combination of JADE and the JADE security add-on, is the most prominent security extension of JADE, which was developed by Telecom Italia. JADE-S is publicly distributed on JADE’s website and has been studied, used, and tested extensively. Figure 2 shows the architecture of JADE-S.

JADE-S also has a number of shortcomings, which were tackled in several academic papers. Unfortunately, no code is publicly available for these improvements. JADE-S is still under development, and does not cover all necessary features to secure MAS entirely.  Below, a list of identified shortcomings in the state of the art:

JEMMA (Java-based Energy ManageMent Application) is an open-source LGPL modular framework that facilitates the development of home energy management (monitoring and control) applications [‎18] It has been developed by Telecom Italia, one founding member of the non-profit Energy@home Association [‎19]. Current release is version 0.9.

The Energy Management System can be executed on a Home Gateway that is able to collect energy data (metering information) from the Home Area Network (HAN), and publish them in the Home Network (HN) and the Wide Area Network (WAN). 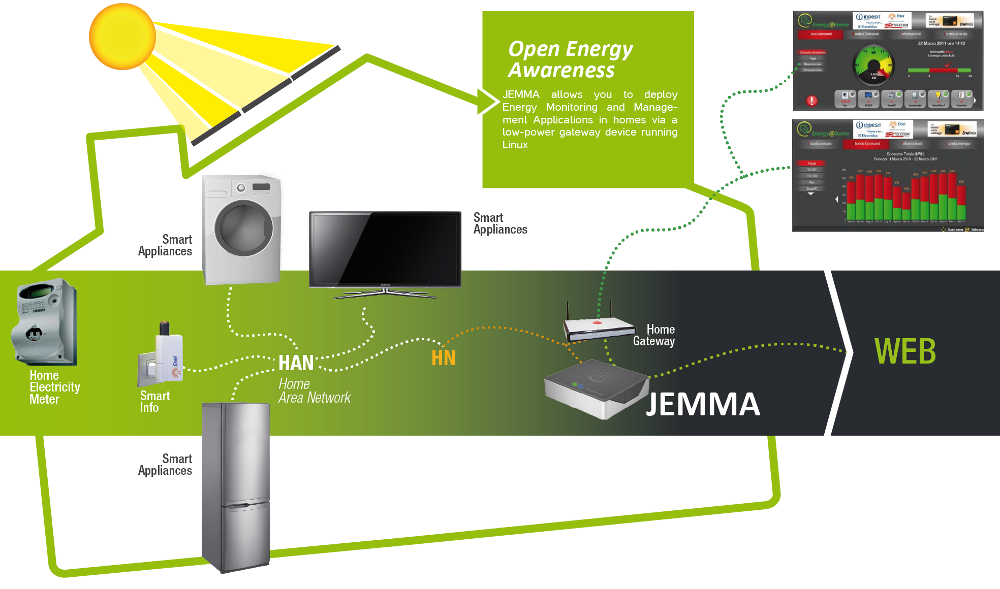 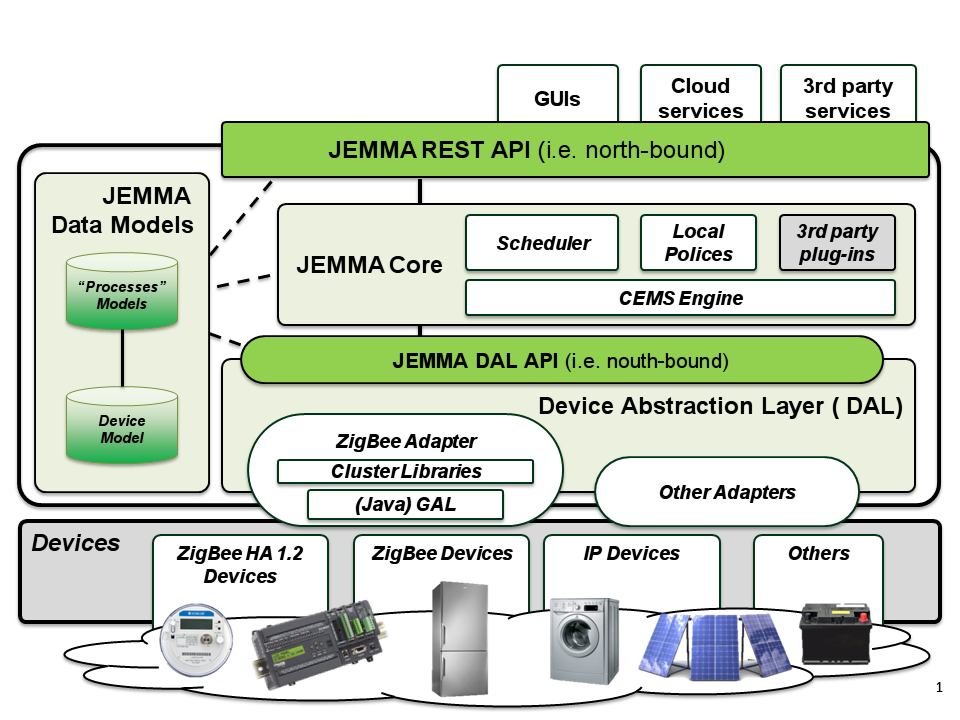 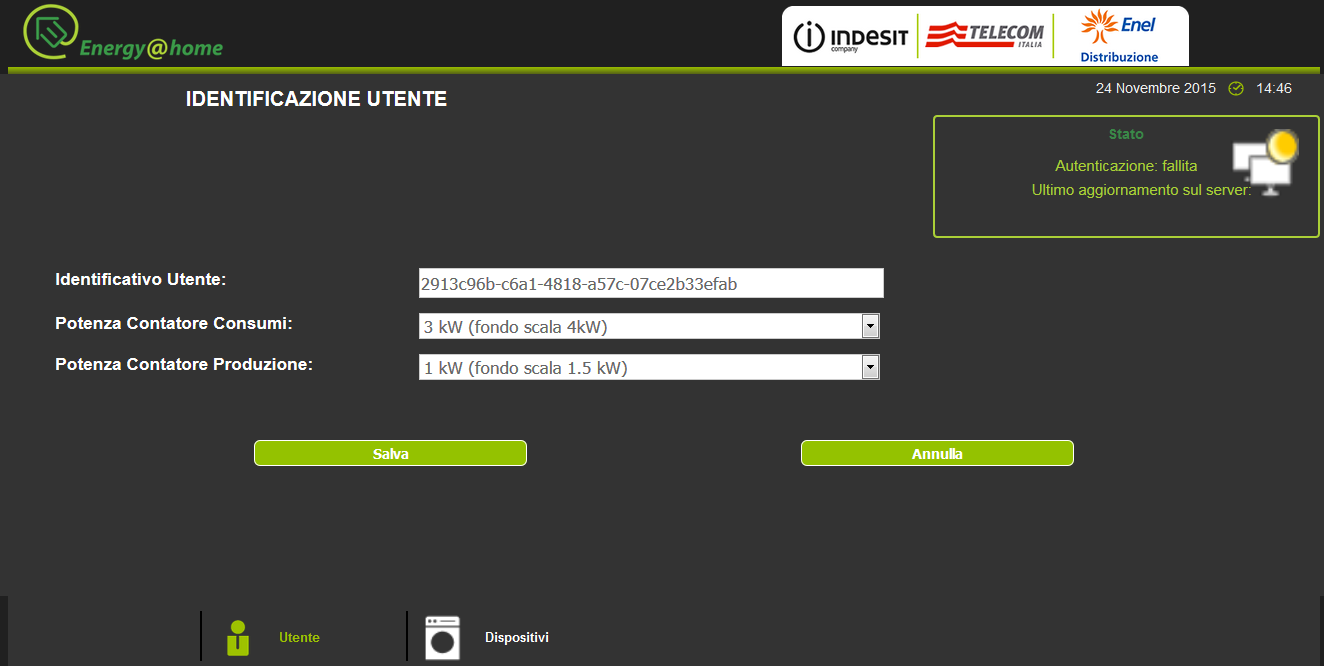 The default configuration of the JEMMA framework provides a HTTP access to the web portals depicted above, while one could expect to get a HTTPS connection instead. The configuration file config.ini allows activating easily the HTTPS protocol, though. However, it can be also observed that this configuration file contains a plain text password for accessing to Apache Felix OSGi Web Console, which is clearly not compliant with the state of the art! In addition, it seems that this configuration file is not protected against any alteration, and anyone with a write access profile could modify the parameters. It is then important to offer the right level of protection to this file.

JEMMA has a number of security shortcomings, namely:

Mas2tering security requirements can be satisfied through a range of solutions including secure development life cycle (built-in security) and usage of secure external functional components and security tools which can include the GEs. The following are the titles of the Mas2tering requirements specified particularly for the GEs:

FIWARE GEs are currently categorised under seven categories, each focusing on a certain technology area e.g. security, IoT service enablement. D5.1 included discussion of a set of GEs that may be of relevance to the requirements of Mas2tering. Most of the evaluated GEs are in the security area including Identity Management GE, Security Monitory GE, Content Based Security GE and Authorization PDP GE. The following are some of the security-related considerations regarding the integration of the GEs into the Mas2tering platform:

–        Assurance regarding the reliability and robustness of the security functions requires intensive testing and wide user community and feedback regarding potential vulnerabilities. Based on the experience of TSSG in using the GEs the current versions lack satisfactory security assurance from the aspects described and often subject to runtime errors.

–        The instability of the FIWARE catalogue such as the removal of GEs and consequent loss of developer support, access to updates, etc. This also affects the reliance on the continuity of the security services provided by the GEs. Since the start of Mas2tering project Content Based Security GE has been removed and the Security Monitoring GE is deprecated.

–        In addition, in the context of another EU project Finesce[2] , TSSG carried out comparison of the current quality of the GEs to alternative commercial and open source software based on a set of criteria such as performance, compatibility, usability, reliability and maintainability. The results of the comparison show that alternatives are often scoring higher possibly due to their level of maturity compared to the more recently developed GEs.

–        Dependency of some of the security GEs on other GEs can further complicate their usage in Mas2tering platform and expose the platform to more cascading errors.

–        Some of the GEs are only available as an online service which makes it impossible or difficult to evaluate their security and becomes more reliant on trust in the competence and integrity of their service providers.

Despite the drawbacks described above, there seems to be active development going on to improve the GEs and progress their technology readiness level. Mas2tering project has identified alternative components that provide more reliable and stable functions. Such components include PANDA (access control to the HAN), ARX anonymization, JADE framework, cloud synchronization and forecasting service. These components are detailed in other deliverables such as D5.3.

This section discusses technologies developed and implemented as part of EU projects and EU R&D focused on cyber security. Tables in this section include description of the following projects:

–        AFTER – A Framework for electrical power sysTems vulnerability identification, dEfense and Restoration;

The listed projects have been selected based on their relevancy to cyber security technologies applied to the energy network. They have been then analysed in terms of general objectives, cyber security objectives, components and services developed, demonstration activities and relevance to the Mas2tering project.

Table 18 A Framework for electrical power sysTems vulnerability identification, dEfense and Restoration (AFTER)

Cybersecurity is a fast evolving area of research and development that aims to keep pace with advancing cybercrimes, intrusions, and various forms of cyber-attacks. Advancing cybersecurity for the smart grid is of particular importance in order to assure the success of rolling out of its technologies and protect the critical electricity infrastructure. A distributed multi-agent-based platform is developed in the scope of Mas2tering project, the detailed understanding of the available cybersecurity standards and technologies, and identification the gaps between existing standards and required standards are vital for the success of the project. The authors of the deliverable perform a security and privacy assessment of the three selected project use cases. The assessment helps identify areas of vulnerabilities and weaknesses that need to be addressed in the project. We then evaluate the state of the art of the security standards and technologies that are relevant to the project. In addition, we evaluate other relevant smart grid and telecommunication standards that are not security-focused from a security point of view. Based on this evaluation, we provide recommendations for improvements and justifications of choices made in the project.